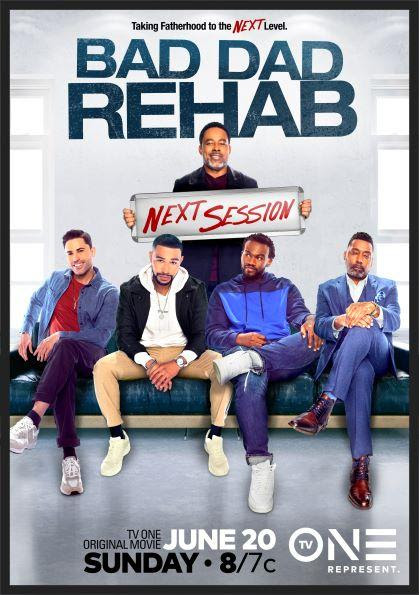 Following the success of its popular film BAD DAD REHAB, TV One today announced the premiere of BAD DAD REHAB: THE NEXT SESSION. The film features a brand-new cast that includes rapper Anthony “Big Daddy Kane” Hardy (Something From Nothing: The Art of Rap, Dead Heist) as Owen, Lamman Rucker (“Greenleaf”, “Why Did I Get Married”

as Chauncey, Onyekwere Eme-Akwari (“Queen of the South”

as Hosea, Chrystale Wilson (“The Rich and the Ruthless”

“The film is a fun, entertaining and authentic way to address the struggles and varied realities of fatherhood” said Jason Ryan, Executive in Charge of Production for TV One. “I’m excited to help bring this important story to our audience as we celebrate the men who shaped us this Father’s Day.”

BAD DAD REHAB: THE NEXT SESSION follows the new class of Bad Dads hailing from Jersey City, New Jersey who must confront their personal demons in order to get their act together and become better dads. Hosea (Mendez) is more concerned about being his rebellious son’s best friend than disciplining him. Marshall (Eme-Akwari) works pyramid schemes in his mancave instead of helping his frustrated wife and son. Chaucey (Kimble) holds a grudge against his ex-girlfriend oblivious that it’s hurting their young daughter. Owen (Hardy) spent thirty years denying his daughter from an affair but now wants to make amends before her impending wedding.

“Being a dad is a layered, yet rich experience. It was awesome to be part of a film that captures the reality of fatherhood which is not easy, but very gratifying” said Big Daddy Kane.